Ok, I normally try and ignore the conversation of religion because I feel like other life choices it’s up to the individual. But since my superstitious family has gone hillbilly stupid about this, I have to say: FUCK THIS GARBAGE!!!!!! I’m not saying I’m an atheist (I have the believe in some form of a higher power, so I cannot deny the existence of a “God”). But I will say most religious dogma is a whole bunch of BULLSHIT!!!! I think some morals taught in the holy books are great but the vast majority of the texts are pure fairytales. My other issue with religion is the actions of those who follow it and their constant hypocrisy.

Even though I was raised between Judaism, Islam, and a little bit of Christianity around me, I managed to liberate myself from these ancient fairytales and the backwards thinking that goes along with it. My first major influence is Bill Maher and his documentary “Religilous.” While there are noticeable inaccuracies in the film and I did find Maher unequally harsh of Muslims as compared to the Jews, I will say that the message is what made me think. It is what made me dwell more into the idiocracy that faith has the ability to propagate rational thought. The other major influence came George Carlin: a firm atheist and someone who made more logical sense than any wackadoodles that preach “God is always right and don’t question him and obey your government as long as it follows bomb the fuck outta the third world good God Christian Conservatism”. Add science and logical thought and I realized that the only thing a “holy” book is good for is toilet paper when you’re out of the good stuff like Charmin. So for the believers here are my list of grievances against religion and dickheads who insist I follow it.

1 . God created the world in 7 days- BULLSHIT!!!!!! How the fuck does any idiot believe that the Earth is only a couple of thousands of years old when geological evidence says otherwise? When modern science proves the Earth is 45 billion years old, how can anyone be brain dead enough to believe an ancient fairytale? Science is not magic, it’s based on repeated experimentation, and observation!!!!

2. Creationism taught is a science- While I do somewhat believe in intelligent design (I do still believe in God), I believe the theory of evolution should be taught as a feasible scientific theory until it’s disproven. Intelligent design and creationism require some sort of believe, the theory of evolution is more scientific and a more sound in explaining the propagation of life.

3. The Ten Commandments- Honestly, 10 fucking suggestions that mostly deal with how to worship God. Forbidding stealing, murder, and not coveting your neighbor’s stuff are great ones. How about thou shall not rape, or thou shall not wage war to take someone’s stuff. Those would be good ones since rape and bombing countries for their oil is a pastime in this country. How about thou shall not be religious and contradict yourself. Hey dad (to my Muslim father): after you’re done yelling at me about how I’m going to hell for speaking  blasphemy. I want to ask you: is the heineken you’re drinking halal? (halal means allowed by God and Muslims can’t drink by religious law)

4. Jesus is be born from a virgin (Mary)-Christians will wage jihad on me for this. I’ll give this credit to Mary: she came up with the best excuses for cheating on her husband at a time a paternity test could not be determined. “God impregnated me. I swear Joseph I have not been fucking any other guys in the village, especially not the African slave boy with the giant black snake. I was a virgin until God stuck his mighty “will” into my cunt.” I’m sure Joseph thought about this long and hard and realized his wife did cheat on him. But rather than lose face; he would go with the story, have some prophetic dream about this child to be named Jesus and he would be the messiah and we’d all be save by him. Who could disprove him? They didn’t have paternity tests back then. That sounds more like a likely story. If it was true, why did God not drop his holy seed elsewhere when man needed more “messiahs”? We could have used them quite a few times during human history. You know why? Because it’s all bullshit, just like like Zeus impregnating all these mortal women and creating all these demigod heroes. Remember Hercules? As for the case of little baby Jesus “God you are not the father”

5. Religion is the source of all morality-Funny!!! To do good just to get into heaven: is it really good for the sake of good, or is good because one is afraid of the other place? I seen more non religious people do more good out of human compassion than in the name of God. Let’s straighten the fuckin record straight: you don’t need religion to learn morals. All that is required for morality is human compassion. You can learn it from good natured religious people and good natured nonreligious people. There are other examples of morality besides a church. Warren Buffet, Bill Gates, Robert Wilson, and  Barry Greenstein are some names when you think of nonreligious philanthropists.

6. Religious “Logic”-When I challenged my mother with question “If God wants us to do something, and he has all this power, why doesn’t he just come to Earth, hold a press conference, and tell us all this stuff?” Her response was “That’s not how God works.” To me that’s just a whole load of horse semen, because if God wants something out of us, he can just appear in front of us and then everyone will believe and everyone will be on the same fucking page. That makes logical sense!!!! Religion has none of that. Miracle is another one: God intervenes and subtly influences things so a woman survives a car crash. Now she believes in Christ’s power. If God can do all these great things; why not just end hunger, or make enough of a clean cheap energy source that would make bombing a third world country over it completely useless. That would be a great fucking miracle right there. Once again, no fucking logic on that one either. Why? Because it’s religion: Rules of Logic non applicable here motherfuckers!!!!

7. Hypocrisy of the religious community: Ok this is my biggest peeve and will be longest fucking rant of my points. God is supposed to be an all loving and all merciful. Yet more people have done some fucked up shit in the name of God and other reasons. Does anybody remember the crusades or the Spanish Inquisition? How about the colonization the Western Hemisphere? It was does done by Catholics to spread Jesus’s of love and peace. You know how that fucking went? Shoot, stab, rape, pillage, take gold, take land, and wipeout natives!!! Yeah “how Christian” is that? The other “religious” group decided to ram two planes into the twin powers, and one into the Pentagon. Killing in the name of God is like making war in the name of peace or fucking for virginity. And as if the killing isn’t enough, persecution of “heretics” and the non believers. Whatever happened to Jesus’s message of unconditional love, peace, and tolerance? Look at American Republican politicians: “I’m against gay marriage because it’s against the bible” But Senator what about healing the sick with universal healthcare and feeding the hungry and homeless with the social safety net? That’s something Jesus would do. “Oh fuck those moochers, let them get a job and buy health insurance. If they can’t? Fuck them and let them die.” That’s not very Christian at all, in fact it’s picking and fucking choosing. It is hypocrisy in the worst form. For every Christian against gay marriage: read all of Leviticus and see if you’re following all of it to the letter before you decide Gay bashing is the “good” Christian thing to do. I’m willing to bet, most of you aren’t. It is like Muslim whose bitching about how his son is not being a good by the book Muslim while he drinks a gin and tonic bitching to his hindu friend whose having a hamburger and his Jewish friend having triple bacon cheeseburger on Passover while a Catholic Priest is getting blown by a nun in the next table over.

I will say this, these are my thoughts and opinions. If anyone disagrees with me, that’s their right and I won’t deny them of that right. However, I give zero fucks if anyone feels insulted by my opinion.This is my personal experience, and I have my reasons for skepticism. I’m fine with saying I don’t know or I don’t have all the answers. Once again I believe that there is some higher power, I very much doubt he/she/it  wrote any of the crap people take as dogma. As George Carlin said, “It’s all bullshit folks and it’s bad for you.” 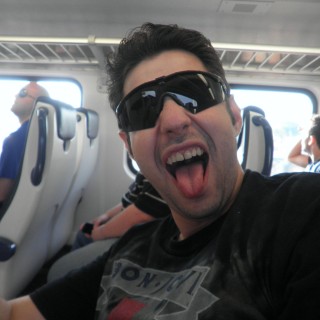